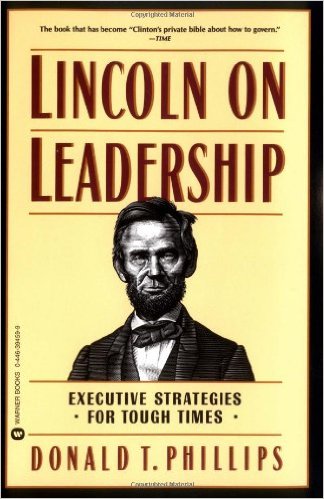 Only ten days before Abraham Lincoln took the oath of office in 1861, the Confederate States of America seceded from the Union taking all Federal agencies, forts, and arsenals within their territory. To make matters worse, Lincoln, who was elected by a minority of the popular vote, was viewed by his own advisors as nothing more than a gawky, second-rate country lawyer with no leadership experience.

Lincoln On Leadership is the first book to examine Abraham Lincoln's diverse leadership abilities and how they can be applied to today's complex world. In honor of our 16th President's birthday, we are taking a look at Lincoln's 15 leadership attributes discussed in this highly acclaimed book.

Chapter 1: Get Out of the office and Circulate Among the Troops

"His cardinal mistake is that he isolates himself, and allows nobody to see him; and by which he does not know what is going on in the very matter he is dealing with."

"A house divided against itself cannot stand…our cause must be entrusted to, and conducted by its own undoubted friends - whose hands are free, whose hearts are in the work - who do care for the result."

Lincoln's remarks from "A House divided" speech, in which he accepted the nomination for US senator at the Republican State convention in Springfield, Illinois (June 16, 1858)

Chapter 3: Persuade Rather Than Coerce

Lincoln's remarks in the first Lincoln-Douglas debate when examining the influence Stephen A. Douglas was having on the public (August 21, 1858)

Chapter 4: Honesty and Integrity Are the Best Policies

"I am compelled to take a more impartial and unprejudiced view of things. Without claiming to be your superior, which I do not, my position enables me to understand my duty in all these matters better than you possible can, and I hope you do not yet doubt my integrity."

Lincoln's closing comments in a letter of support for General-in-Chief Henry Halleck to a close friend who urged his dismissal (May 26, 1863)

Chapter 5: Never Act Out of Vengeance or Spite

"I shall do nothing in malice. What I deal with is too vast for malicious dealing."

Lincoln's comments in a letter about the readmission of Louisiana to the Union (July 28, 1862)

Chapter 6: Have the Courage to Handle Unjust Criticism

"Neither let us be slandered from our duty by false accusations against us, nor frightened from it by menaces of destruction to the government, nor of dungeons to ourselves. Let us have faith that right makes might, and in that faith let us to the end dare to do our duty as we understand it."

The closing statement of Lincoln's Cooper Institute Address, in which he encouraged party members to hold fast to their beliefs (February 27, 1860)

Chapter 7: Be a Master of Paradox

"Take time and think well upon this subject.….Nothing valuable can be lost by taking time…. Delay is ruining us…. Time is everything…. Please act in view of this…. Make haste slowly."

"Some single mind must be master, else there will be no agreement in anything…"

Part of Lincoln's firm stance regarding new elections in the State of Arkansas (February 17, 1864)

Chapter 9: Lead by Being Led

"Now, the undertaking being a success, the honor is all yours; for I believe non of us went farther than to acquiesce… But what next? I suppose it will be safer if I leave Gen. Grant and yourself to decide."

Part of Lincoln's response to General Sherman for his "Christmas gift" - the capture of Savannah (December 26, 1864)

Chapter 10: Set Goals and Be Results-Oriented

"I think Lee's army, and not Richmond, is your true objective point…Fight him when opportunity offers. If he stays where he is, fret him, and fret him."

Lincoln's response to General Joe Hooker, who'd asked for permission to advance on the Confederate capitol rather than engage the enemy in combat (June 10, 1863)

Chapter 11: Keep Searching Until You Find Your "Grant"

Lincoln's response to critics who urged the dismissal of General Grant after the battle of Shiloh, where Grant had been rumored to be drunk (April 1862)

"Still the question recurs 'can we do better?' The dogmas of the quiet past, are inadequate to the stormy present. The occasion is piled high with difficulty, and we must rise with the occasion. As our case is new, so we must think anew, and act anew."

Lincoln, in his Annual message to congress, exhorting its members to join him in a united venture to be conducted by the executive and legislative branches of government (December 1, 1862)

"Extemporaneous speaking should be practiced and cultivated. It is the lawyer's avenue to the public. However able and faithful he may be in other respects, people are slow to bring him business if he cannot make a speech."

From Lincoln's notes for a law lecture intended to advise younger lawyers how best to succeed (July 1, 1850)

"They say I tell a great many stories. I reckon I do; but I have learned from long experience that plain people, take them as they run, are more easily influenced through the medium of a broad and humorous illustration than in any other way…"

Lincoln explaining to a friend why he often related stories in the course of normal conversation.

Chapter 15: Preach a Vision and Continually Reaffirm It

"All honor to Jefferson - who, in the concrete pressure of a struggle for national independence, had the coolness, forecast, and capacity to introduce…an abstract truth, applicable to all men and all times."

Part of a Lincoln's praise for Thomas Jefferson, one of his early heroes, to a Boston group that requested he speak there on Jefferson's birthday. (April 6, 1859)