Make Your Bed: Little Things That Can Change Your Life

In 2014, Admiral William H. McRaven, a highly decorated navy seal in charge of the Osama bin Laden raid, gave a commencement speech at the University of Texas at Austin and it quickly became the most popular commencement speech in history with over 10 million views.

After the attention the video received, Admiral McRaven turned his speech into a best selling book. It is a relatively short book that can be read in about an hour. However, this is an hour of reading that can change your life. 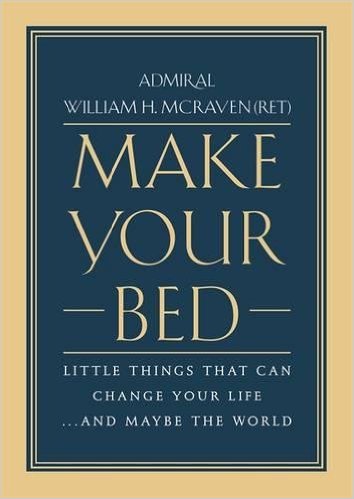 McRaven brings powerful examples to illustrate that challenging yourself on a daily basis is the cornerstone for living an epic life.

"What starts here changes the world," he shared in his speech, and then gave the ten principles he learned during Navy Seal training that helped him overcome challenges not only in his training and long Naval career, but also throughout his life; and he explained how anyone can use these basic lessons to change themselves-and the world-for the better.

He goes on to state, "If you want to change the world, start off by making your bed." Watch his entire speech below.