How I Saved My Small Business: A Colorado Brewery Taps Into an Old-School Pastime

BY ASHLEY ABRAMSON as seen in Money magazine 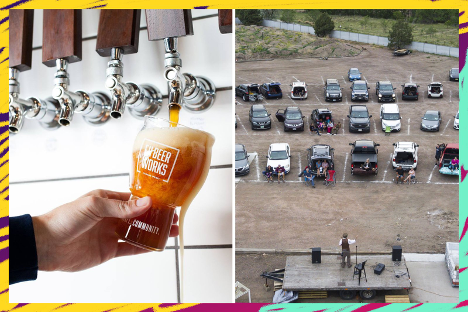 Travis Fields and his wife, Niki, were visiting family in Hawaii when Colorado governor Jared Polis ordered all restaurants to stop dine-in services. So they had to figure out a way to keep their business open from 3,000 miles away.

The couple owns FH Beerworks, a brewery and taproom that sits on five acres of land outside of Colorado Springs, Colo., and employs a team of 12 brewers, bartenders, and salespeople.

Between restaurants and liquor stores, FH has about 130 local wholesale accounts, and Travis hopes to expand to the entire state. But FH’s brewery and taproom are the heart of the business. During a normal summer, he says, the taproom alone brings in about $50,000 in sales each month.

This year, Polis ordered all Colorado bars and restaurants to close on March 16, right before St. Patrick’s Day, one of the biggest “drinking days” of the year. April’s revenue was even worse: Travis says FH made only $25,000 that month (a record low for the business).

Then he got a crazy idea.

Like many small businesses trying to navigate 2020’s surprise economic shutdown, Travis’ first thought was to try pivoting to take out.

He started by selling to-go “Crowlers,” 32-ounce cans of beer filled and sealed in the taproom (like Growlers, but in a can). After a few weeks, FH launched an online store with a delivery option and saw a major uptick in revenue, delivering up to $12,000 worth of to-go beers to customer’s homes on a good week.

The pivot was Travis’ way to keep staff on board, and to keep serving his product. But the FH team also wanted to serve its community — and to give its cooped-up customers something to do again. So they implemented the plan Travis had dreamt up in Hawaii: Transforming FH’s giant parking lot into a drive-in movie theater.

Travis borrowed a baseball field line striper from a local team to draw lines in the parking lot, bought a 5,000-lumen projector and an inflatable screen, and set up an FM transmitter so customers could watch and listen from their cars.

On May 9, FH screened its first movie (“Nacho Libre”). His staff worked as parking attendants to check tickets, and to make sure people were properly social distancing.

There wasn’t beer, because you can’t legally drink while sitting in a car. But Travis created another stream of revenue by selling take-home beer at the events. Each night, FH sold about 40 movie tickets (that’s $600 in revenue), plus about $500 extra in beer sales.

Look out for others

The drive-in wasn’t a major income driver for FH, but that was never the goal.

Travis says he’s grateful that the events brought people together and served the community during a scary, unfamiliar time.

“People needed something to do outside of their house, and we see our duty as doing something social, safely,” he says.

After the movie nights proved successful, Travis partnered with local comics to add drive-in stand-up comedy to FH’s parking lot repertoire. His team converted a 16-foot flatbed trailer into a stage, and, like the movies, beamed the performances through an FM transmitter.

The comedy nights helped struggling local comedians who didn’t have anywhere to perform finally get some gigs.

The icing on the cake? At the end of it all, everyone got to keep their jobs. Travis had to cut some hours, but he says he still has 12 employees on payroll.

“We really feel like we served the community well,” he says.

On May 25, Colorado began allowing restaurants and bars to open with restrictions. A far cry from its laid-back, taproom vibe, FH Beerworks transformed into a sit-down restaurant serving only beer, complete with a host and servers with masks and contactless, mobile ordering.

Travis is crossing his fingers for a successful summer. So far, customers have been happy to have a place to enjoy beer again: In its first five days open, the brewery made nearly $12,000 in revenue.

And the movies? Travis never dreamed a drive-in theater would be part of his business strategy, but as for now, the show must go on. FH Beerworks continues to host drive-in nights—even with the taproom open—so customers can order beer (or grab dinner from the food truck parked outside) before the main event.

“Our pivoting told our customer base that we are not going anywhere, that we are going to do what it takes and be creative and figure out how to make it work, and that we’ll be here when you are allowed to come back,” he says.